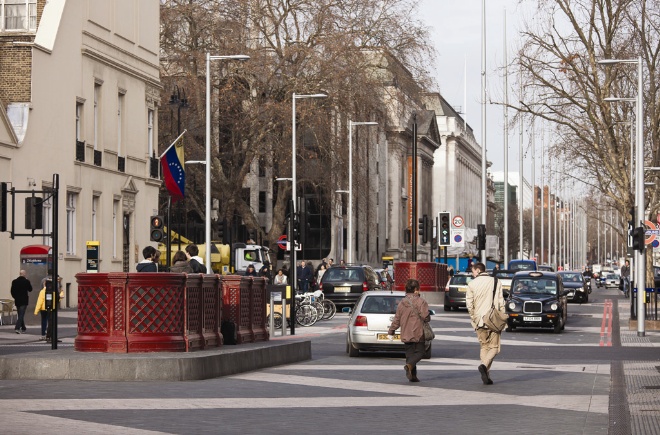 Ten years ago, I penned an article entitled ‘Shared Space – but for whom?’ published in Social Caring (September 2005); the in-house journal for the now de-funked Social Care Association. It was, to my knowledge, never available on-line.

Today I reproduce it as in the intervening period nothing much has changed. But two debates are before Parliament that could, at last, have an impact.

‘Shared Space – but for whom?

For many years, blind and partially sighted people have had to contend with dustbins and wheelie bins, vehicular traffic, inappropriate tactile paving (where it exists), street furniture, cafes, etc. populating and obstructing our pavements. Similarly Rehabilitation and Mobility Officers have had to identify strategies to alleviate the need for visually impaired people to access assistance to undertake what should be an independent journey.

However, this is about to change. Are the planners to make wider pavements, or are enforcement agencies going to tackle the illegal occupation of the pavements? Sadly, in both cases, probably not.

A new concept in urban design is being imported from the Continent; namely ‘Shared Spaces’. The concept aims to “prevent the road looking like a place designed for traffic”. The concept differs from previous initiatives to increase the accessibility of the built environment in that it is not pedestrianised, nor even semi-pedestrianised; it is not multi-tiered: it’s simplicity is in its crudeness. It is a flexible concept that restructures the way we build the the environment in which we live and move.

An extension of the Home Zones, such projects can vary in complexity but in its most dramatic conception, an area would witness the removal of all physical and non-physical obstructions and barriers from the environment – no kerbs, no crossing, no signage, no lines – thus, no pavements to infringe upon. But unlike Home Zones, these ‘Shared Spaces’ would be in our village, town and city centres; and on major roads and junctions.

The concept was developed by Hans Monderman, a traffic engineer from the Netherlands, who believes that open access will in itself act as a regulator for traffic flows whether it be motorised or non-motorised vehicles or pedestrians. The removal of barriers will inhibit motorists from driving in any but a cautious way. It is as much based on the psychological inclinations of street users; as open space and traffic management design itself. Indeed, experts have referred to this process as “psychological traffic calming”. Joost Vahl, another exponent states that “the only way to make a traffic junction safe is to make it dangerous”!

Also, the concept’s author cites that drivers will communicate with other street users such as pedestrians by eye contact. He has walked into a street backwards to demonstrate what he believes, that drivers will reduce their speed as they are aware that free access exists to pedestrians as well as vehicles. However, how many visually impaired people are able to “make eye contact”?

A journalist once asked “Who has the right of way?” Hans Monderman replied “I don’t care. People here have to find their own way, negotiate for themselves, use their own brains”. The removal of tactile paving and crossing points, whether they be controlled or uncontrolled, will inhibit free travel of both disabled and able bodied pedestrians.

The removal of speed limiters is seen almost as a beautification of the built environment as signs are considered to be visual clutter, and traffic calming measures are deemed inappropriate. However, the loss of kerbs and lines means that there is no clear indication as to where the vehicular zones end and the pedestrian zones commence. the addition of street cafes, trees, flowerbeds, and even fountains are provided to augment the ‘Shared Space‘ concept. It may be argued that the concept is replacing one set of street clutter with another, albeit a ‘sweeter smelling socially acceptable’ variety.

There is evidence to suggest such a concept works. In areas where this concept has been tried (Continental Europe and the United States), road traffic accidents have declined. But research does not show if this reduction is due to the pedestrian population abandoning these areas for safe routes. Similarly, no figures pertaining to the changing levels of usage by the visually impaired exist. We should also remember that in countries such as the Netherlands, there is a greater tolerance towards cyclists than in the UK. Consequently, drivers show greater respect for things that travel slower than they.

Crossing roads, however, is only part of the concern. Visually impaired people often rely on kerbs, street furniture, etc. to wayfind. The loss of landmarks, even on familiar routes may have detrimental consequences on their free movement. Pedestrian flows are often used to orientate around familiar environments, but where no identifiable pavements exist, the flow of bodies will equally evaporate.

Should we be worried for just those in our society with a visual impairment? Where will children be able to put the ‘Green Cross Code’ into practice if there are no kerbs to stop, look, listen? Where would it be safe to park, because as we know even in areas where parking restrictions exist, there is always someone who has the ‘right’ to park (emergency/utility/delivery/public transport vehicles)?

The ‘Shared Space’ concept has now arrived in Britain. In London, Kensington High Street is complete, and the Exhibition Road Project is under way. Both are examples of how the ‘Shared Space’ concept may be interpreted. Take-up in this concept is expected to be nationwide. Projects are not confined to large city developments. Rural areas such as Wiltshire and Suffolk are seeing changes, the latter is taking part in a European Union funded project to research the benefits of the concept. The Office of the Deputy Prime Minister and the Department for Transport are currently working on a new guidance document, the ‘Manual for Streets’, and there is a strong possibility that this concept will be recommended as good practice.

The concept is, I believe, is flawed in almost every aspect. Yes, I concede that the de-cluttering of our built environment would enhance the quality of life for all who choose to move around it. It would also facilitate and stimulate social interaction. But there has to be a realistic compromise between what is clutter and what is essential. We should remember that inclusion is for all, not just those who can access it.

On 15 October 2015 in the House of Lords, Lord Holmes of Richmond MBE led a short debate raising once again the issues of Shared Spaces. Lord Holmes is the author of ‘Accident by Design: The Holmes Report on “shared space” in the United Kingdom’ [http://chrisholmes.co.uk/wp-content/uploads/2015/07/Holmes-Report-on-Shared-Space-.pdf]. The debate received cross party support, and a promise from the Government that fears raised will form part of its ongoing research alongside the Chartered Institute for Highways and Transportation that should produce a report by summer 2016.

The second debate in front of Parliament is Simon Hoare MP’s Pavement Parking (Protection of Vulnerable Pedestrians) Bill 2015-16. The private members bill is due it’s second reading in the House of Commons on 4 December 2015. Although it is not directly related to Shared Spaces, it does highlight the importance of the pavement as a pedestrian refuge.